ThankScreaming Day: Book Reviews for Apexology Horror and The Undead That Saved Christmas 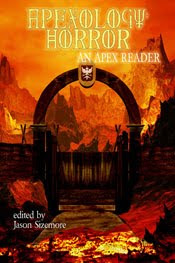 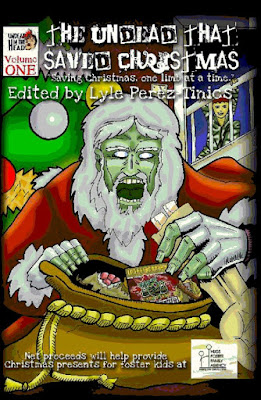 Thanksgiving afternoon and you’re already wishing the relatives would go home? Instead of listening to Uncle Fred’s proctologist stories, sneak away with something even scarier than your family. Both of these books are available in e-book form, so you can hide in the bathroom with your smartphone or e-reader until the last dishes are done.

I read horror much like someone who is discovered with ill-advised substances: “I’m holding it for a friend. Really.”

That said, I do like the non-gory stuff, especially if it’s funny. When I saw the phrase “Cthulhu comedy of manners” on Twitter one day, I had to know more. Apex Book Company was kind enough to share Apexology: Horror, a huge horror anthology which I quickly realized could only be read during full daylight with all the lights on. These are old-school scares done right; no sparkly undead here, just enough creepy terrors to make you crave a Snoopy night light. I did find that Cthulhu story, “To Every Thing There Is A Season” by Dru Pagliassotti, and loved it! If she turned it into a full book, I would snap it up. Her writing is funny, freaky and a better read than “Sense and Sensibility and Sea Monsters.” I also enjoyed “The Spider In The Hairdo” by Michael A. Burstein, which gave an old urban legend new, frightening life, and “Transylvania Mission” by Lavie Tidhar, a satisfying twist on Dracula. Some stories weren’t my taste, but there is something in this collection for everyone, so it is a great bargain for any scare-seeker.

For the second book, this is part review, part plug. The Undead That Saved Christmas is a zombie holiday anthology featuring stories, art and poems by Stacey Graham, Jason Tudor, Angie Mansfield, and oh yeah, me! Need more awesomeness? It also has an introduction by S. G. Browne, author of zombie hits Breathers and Fated. Proceeds from the anthology go to the Hugs Foster Family Agency and editor Lyle Perez-Tinics has selected a diverse undead lineup to keep readers entertained.

In addition to great folks and a great cause, the book has some stellar zombie action, from mad scientists and killer elves to zombie Santas and AK-47s painted like candy canes. “The Legend of Zombie Claus” by Joe Fillippone has some of the best dialogue I’ve ever read in a horror story, and several stories have a delightfully twisted sense of humor; Graham’s “To All A Good Fright” made me laugh out loud from the first line. The Undead That Saved Christmas is also available as an old-fashioned print book, just in case you want to share the drippy, gooey, brain-eating fun with someone special.

Posted by Unknown at 6:42 PM No comments:

Not Even Close to Almost Famous

“If you ever get lonely, just go to the music store and visit your friends.”-Penny Lane, Almost Famous

I started freelancing the same year that movie came out. A friend taped it off PPV for me since it was about a magazine writer. I watched it every day during a long lunch break between scouring the Internet for writing opportunities and creating press releases and newsletter copy for local businesses. Aside from the fact that it featured a tiny part by my fave musician, Peter Frampton, it showed the writer’s life to be hopeful, delusional and frustrating all at the same time. Virginity-popping threesomes and epic rock tours aside, it still resonates with me today; the main character is constantly worried about deadlines and getting the job done.

I remembered the movie quote above when I could finally go to the bookstore, pick up a magazine and see my name. It became more relevant as I gained writer friends online; I began to look for their bylines too. Magazine articles became books, and I loved each rare time I found a friend’s name on a shelf.

Now, 95 percent of my writing community is online and those names are bountiful in the stacks. Last time I went to Barnes & Noble, I bought four books, each one by someone I already knew via Absolute Write, Twitter or Facebook. I learn from them, admire them and feel like I’m in on something special. It’s a delicious thrill, one that I’m eager to share whenever my book finally finds an agent, a publisher, and a space on that shelf. My time is coming. Until then, I have social media, texting and e-mail.

But when I feel lonely, I still go to the bookstore and visit my friends.

Mr. Random has made the selection, and the winners of a copy of THE ESSENTIAL GUIDE TO GETTING YOUR BOOK PUBLISHED are.... Michelle from Clover Hill Book Reviews, and Andrea! Congratulations, please email or DM us your addresses, and we'll get the ball rolling on those prizes!

Thanks to everyone who entered, and a big thank you to Workman Publishing for making this giveaway possible!
Posted by Unknown at 2:05 PM No comments: