Action Movie Girlfriends: Are You at Risk? 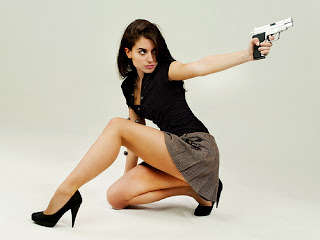 One of the greatest dangers to fictional women through the decades is the role of Action Movie Girlfriend. These innocent ladies are killed off willy-nilly just so their secretly-super guys can step up and wreak vengeance on evildoers.

Worried that your zero might turn out to be a hero and your days may be numbered? Take this quiz and find out!

a) A stoned pizza delivery guy who plays World of Warcraft all day.

b) Secretly trained by a deadly cult/martial arts school/bunch of gangsters/killer aliens but now he’s just trying to lead an ordinary life.

a) Getting committed to an asylum and doing enough pull-ups that I can cock a shotgun with one arm.

b) Throwing a few kung fu moves until I am overpowered by bad guys and/or knocked out a window.

a) No hopes and dreams, just an asthmatic turtle named Frank.

b) Secret superhero identities and separate cans of whoop-ass.

c) An adorable tot who either has a target on his back or the ability to learn ninja moves from his daddy.


4. Lately my boyfriend has seen me….

a) In a giant cargo loader kicking an alien’s ass.

b) In a slow motion montage of happy moments laughing in the park.

c) In a picture frame that will be broken and strewn about later in the movie.


If you answered with all Bs, you are at risk. Step up the jujitsu lessons, practice at the gun range more often or just leave him for someone else. Any guy will do, as long as they don’t sparkle. (That opens up a whole new can of worms.)

If you answered all Cs, RUN! Don’t pack a bag, don’t scribble a message, just run! You are moments away from hearing bad guy theme music while you’re unpacking the groceries.

If you answered all As, you’re not in danger, but your boyfriend could be toast, because you’re the hero. Congratulations and condolences.


Photo by GonzaloMerat via Flickr
Posted by Unknown at 12:52 PM 5 comments: 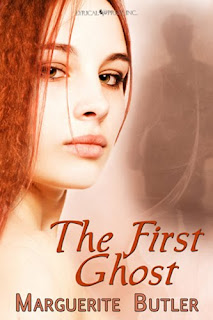 Portia Mahaffey had a crummy job, no boyfriend and a tiny apartment. Still, she believed she had a good life until the ghosts showed up. Who knew adventures with the undead could get you fired, make you solve a murder and help you find not one but two hot guys?

THE FIRST GHOST by Marguerite Butler is a thoroughly enjoyable, fast-paced paranormal ride. When the reader first meets Portia, she’s unlikable and slightly pathetic, a Muggle in a family of clairvoyant women. She thinks her life is perfectly fine without the family ‘gift,’ but when she finally sees her first ghost, her universe is tumbled upside down with clingy spirits, a farty dog and a talent for finding trouble.

I loved Butler’s new characterization of Death: she’s sharp with a deadpan (naturally!) sense of humor. In fact, all the characters are fully-rounded and very believable. Each has his or her own flaws and talents, and the dialogue is very natural, from the hot doctor she starts dating to her neurotic, funeral home-owning family. These characters act like real people and it makes this book a joy to read.

At first I didn’t care for Portia, but once she began her journey and her ultimate transformation from selfish chick to kind-hearted protector, it all made perfect sense. The story really took off for me from the initial hospital room scene where she meets the ghost of murdered secretary Corinne, and I was hooked from there until the very last page. Butler has a deft hand for weaving plotlines together and keeping the action flowing from one chaotic day to the next without losing the reader in a flurry of murders, suspects, industrial espionage and romance. This is the story I would wish for Nancy Drew; you know, if she grew up, got a concussion and saw dead people.

The book ties up some loose threads but not all of them. I’m hoping that’s because Butler plans to continue the series and give Portia a rich, full, dangerous life.

THE FIRST GHOST by Marguerite Butler is published by Lyrical Press and available in a variety of ebook formats on the publisher's website and at Amazon.

Since this is a holiday weekend (and I've been up to my neck in freelance work lately) my monthly AW book review will post on the second Friday in July on the 8th. I'll review Marguerite Butler's ebook THE FIRST GHOST! Need some great suggestions for holiday weekend reads? I'm rotating between Butler and three other great books: HEXED: THE IRON DRUID CHRONICLES by Kevin Hearne, A GRIM PACT by Adam Slade and ALMOST A SPINSTER by Jenna Petersen. Enjoy!
Posted by Unknown at 8:55 PM No comments: