The compassion of Hawthorne's daughter 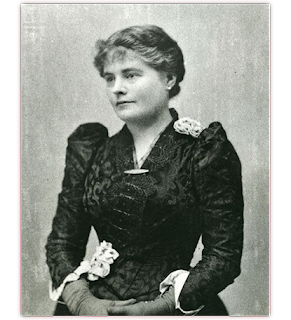 Rose Hawthorne was born on May 20, 1851, to famed author Nathaniel Hawthorne and his wife Sophia.  Rose spent her youth in Europe, marrying George Lathrop when she was 20, after the death of her mother.  Married life wasn’t kind to Rose, who suffered the death of her five-year-old son and an ongoing relationship with an apparently abusive alcoholic husband.  She wrote poetry and short stories, trying to channel the talent of her father; in her volume of poetry, Along the Shore, she talks of his gifts:

“Where spells were wrought he sat alone,
The wizard touching minds of men
Through far-swung avenues of power,
And proudly held the magic pen.”

Even though her poetry has a sweet, innocent tone, she didn’t achieve the success she hoped in writing. More and more, she spent time away from her husband and delved into social work. She did write one more book, a recollection of her father’s life called Memories of Hawthorne. The book was written as she began a new chapter in her life in 1897. Her husband died two years before, and she trained to become a nurse in 1896 to further her skills in caring for those who needed it most. Her book consists of her mother’s letters and her own commentary, and it seemed to reclaim her family name and identity. Mentions of literary stars like Herman Melville, Henry David Thoreau, Ralph Waldo Emerson and others brighten the pages, making it a very tame celebrity tell-all.

Shortly after publishing it, Rose made her dedication to God and charity official, becoming Mother Mary Alphonsa and starting the Dominican Sisters of Hawthorne. She spent the rest of her life caring for disadvantaged cancer patients until she passed peacefully at the age of 75, leaving behind a legacy of compassion and sacrifice. Both of her books are currently available for free at Project Gutenberg. Just click the links above.
Posted by Unknown at 12:45 PM No comments: 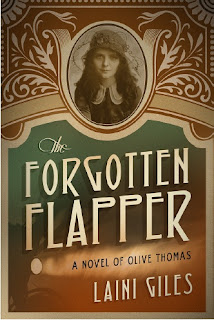 The idea of novelizing a real person’s life intrigues me, especially when it involves one of my favorite topics, women’s history. THE FORGOTTEN FLAPPER: A NOVEL OF OLIVE THOMAS by Laini Giles uses the construct of a first-person ghost story as the author takes the bare facts of Olive Thomas’ life and weaves them into a juicy celebrity tell-all from the dawn of the silent movie era.

Thomas went from innocent artists’ model to Ziegfield Follies showgirl and followed a path of sex, booze, drugs and luxury to become one of the best-known actresses in the “flickers” before her sudden death at 25. Famous in her own right, Thomas married into the Pickford family, becoming sister-in-law to Mary Pickford but never retaining her place in pop culture history as Mary did.

Giles paints a complex picture of a complicated woman who was uneducated yet curious, loyal but quick-tempered and impressively independent in an age when women were fighting for the right to vote.  Thoroughly researched and historically accurate, the book recaptures the voice and feel of a long forgotten chapter in show business, and the period settings come alive. It's easy to see turn-of-the-century New York City and Los Angeles in your mind, thanks to Giles' detailed and vibrant sense of place.

THE FORGOTTEN FLAPPER was an enjoyable read, and apparently is the first of a historic series from Giles. Somewhere in the Great Beyond, Olive Thomas is celebrating being in the spotlight again.
Posted by Unknown at 10:29 AM No comments: