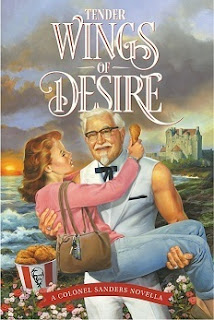 Kentucky Fried Chicken has released their own Regency romance novella for Mother’s Day, because it’s 2017 and nothing makes sense anymore.

Tender Wings of Desire centers on young Lady Madeline Parker, who chickens out of her betrothal to the hunky yet boring Duke of Sainsbury. She has many reasons for doing this, from the fact that he resembles a “vanilla biscuit,” to girl power and wanting to travel somewhere she doesn’t have to embroider babies or pump out useless tapestries for the rest of her days. Something like that, anyway.

Of course she runs away, ending up in The Admiral’s Arms, a tavern that caters to amazingly well-behaved sailors, and meets the mysterious Harland Sanders. In a small show of compassion, Harland isn’t portrayed as an elderly Southern spokeshead in the book; a girl wondering if she’s old enough to marry and her romance with an old Colonel Sanders would be too creepy for everyone involved. Madeline meets him when he’s young, seeing the world, and still yet to inherit the massive American restaurant empire that illogically exists in the Victorian era. Once our headstrong heroine meets Harland, he sticks in the back of her mind like a piece of gristle wedged between her teeth. Eventually feathers fly, drama hatches, and everyone receives a Happily Ever After, even the Vanilla Biscuit Duke.


The plot is painted with large, wide brushstrokes, a winking parody of all those tumultuous romances I read in the 1970s. It’s fun and overblown, never taking itself seriously. My favorite line was “Madeline herself did not mind balls,” which made me snort before I finished the sentence about dancing and all the beautiful gowns. Follow that up with “You are too much. Our Madeline is going to have her hands full with you,” and I was cry-laughing through the rest of the book. Aside from the wicked humor sprinkled throughout, there’s only one sex scene, and it was so subtle I had to read the page three times to make sure they HAD done it, and not just participated in a stellar make-out session. Some news outlets have labeled this a “steamy” read, but they don’t read the same books I do.

While the novella itself may be a light-hearted PR move, KFC’s intentions are not. They know that the romance novel industry is worth $1 billion every year. They also know that Mother’s Day is their busiest day of the year. It’s nice to see them recognize that romance sells, and everyone needs an escape now and then, even if it’s with a bucket of chicken and a free cheeseball read for dessert. Maybe for Halloween, Yum! Brands will give us star-crossed lovers and a werewolf romance in Taco Bell.

**This piece also appeared on The Huffington Post**
Posted by Unknown at 10:30 AM No comments: