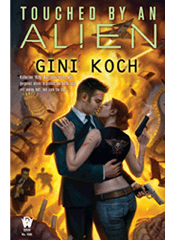 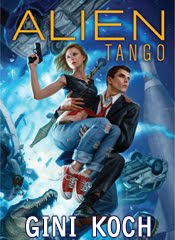 What would it take to get you out of jury duty? For Katherine “Kitty” Katt, it takes aliens and lots of ‘em. By the time she sorts the good from the bad, she’s involved in a twisty love triangle with two hot Alpha-Centurions, and she’s the only human brave enough to save the world from evil, soul-sucking creatures with just hairspray and an attitude.

TOUCHED BY AN ALIEN is the first in the Katherine Katt series, and it is packed with action in every sense of the word. The story is told in first-person, and a lot of the plot falls into place through dialogue. This was difficult for me to wrap my head around at first, since there were several characters interacting with Kitty. Within the first few pages, however, I found the groove and fell for the Tracy-Hepburn patter between Kitty and Jeff Martini, an alien operative so gorgeous he makes SETI a worthwhile investment. In between dispatching bad guys with pens, cars and salt, Kitty finds time to enjoy some of the steamiest sex scenes in science fiction. There’s enough action in elevators to make Steven Tyler proud.

In ALIEN TANGO, Kitty and company once again set out to save the world, and face such scares as bigotry, jealousy and the dreaded school reunion. They learn along the way that the worst enemies aren’t from outer space, and that even alien-hating weirdos hope to get probed by a hot extraterrestrial.

Funny, fast-paced and sexy, the ALIEN series is a fantastic read and would make an incredible action/comedy/romance movie. I’ve read both books twice now, and I can’t wait for the next installment, ALIEN IN THE FAMILY, coming in April. If you want to get lucky with your geek girl this Valentine’s Day, forget flowers. Buy her these books, then go find an elevator. You're welcome.

TOUCHED BY AN ALIEN and ALIEN TANGO are published by DAW Books, and are available at Amazon and other bookstores worldwide.

Very funny, I enjoyed your review and loved the ending! :)

Jennifer (An Abundance of Books)

Thanks! These were two of the best, most fun books I've ever reviewed. Or read. She did a great job!

I completely agree with you. What a great flick! My fingers are crossed for it. I just hope they pick the perfect actor for Martini.