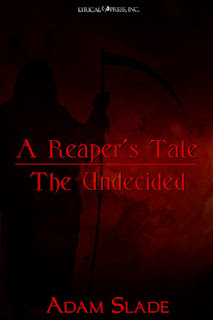 Today I’m introducing a new feature on my blog: on the first Friday of every month, I’ll review a book written by a fellow Absolute Write member. (Not familiar with Absolute Write? It’s an incredible writing forum for newbies and professionals of every imaginable genre. Check it out!)

When chatter about a book invokes the mantle of Pratchett I get all pointy, and not in the good way. In my eyes, writing humorous fantasy means you have a lot to live up to, so I was excited and a little worried when I purchased A REAPER’S TALE by Adam Slade. My concerns were unfounded, because Slade does an excellent job with the main character of Mal, a Grim Reaper with a rogue’s eye for bad girls and a wickedly British sense of humor. Mal’s task is to point souls along to their final reward, but when a reap goes awry and a soul becomes stuck inside him, the adventure begins.

The characters are vivid and well-developed. Mal’s circle of friends and colleagues, from his cat to a 1,000-year-old demon with a very dedicated boyfriend, are unusual and multi-faceted. I never wondered about a demon’s personal life before I read this, and I appreciated Slade’s deft touch with it. The settings and characters are reminiscent of Spider Robinson’s early work, including the secret bar filled with supernatural irregulars hiding behind the façade of a local pub. Mal’s humor and his views on death and humanity do remind me of Pratchett’s satire, but this isn’t the same Death you know from Discworld, not unless you caught him in his early, awkward years. Even though influences from the great fantasy humorists can be felt, this is a new world and the reader will have a blast racing through it with Mal and his unhappy cargo.

A REAPER’S TALE also spends some time in the Great Beyond, where we discover that angels and devils have a breakroom (sometimes the same one) and eternal love and regret can really be a pain in the ass. With soul-grabbing mercenaries, unexpected allies and a final judgment system only slightly better than the DMV, Slade takes the reader on a fast and funny ride. I was sad to let these characters go, and I hope the author returns to Mal’s world again and again. If you’re looking for a great read to slap onto that nice, shiny e-book reader, pick this one.

A REAPER’S TALE by Adam Slade is available through Lyrical Press and on Amazon.

I think I like Adam's concepts more than Prachetts (not a fan of discworld at all). Great review. And now to find another blog by AWer.