Book Review: How to Survive A Garden Gnome Attack 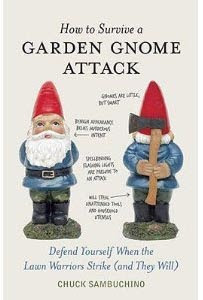 Chuck Sambuchino invites you to a garden party....of Death!

His first humor release, HOW TO SURVIVE A GARDEN GNOME ATTACK from Ten Speed Press, is a twisted, fun read aimed at protecting your ass from those so-called innocent statues lurking on your lawn. Sambuchino creates an intricate little world of danger hidden in everyday life, a world so detailed that I wonder if he has some hidden Dungeon Master experience in his past.

The 106 pages are broken down into sections: Assess, Protect, Defend and Apply. Thwarting the tiny demons involves a multitude of actions, from using commercial fertilizer on your lawn to keep it green and make gnomes crazy to removing all sharp implements from your kitchen, especially “those small pointy little corncob holders.”

Baseball bats, flamethrowers, chemical warfare, moats and even a big @#$% dog come into play as weapons against gnomes, along with advice from gnome defense experts. Find a tiny crop circle in your garden? That means a gnome home invasion could happen at any time.

In this secret, evil gnome-ridden world, paranoia becomes your protector and friend: did you really leave the wheelbarrow out of the garage? Why is the dog acting weird? Advice on keeping a logbook of suspicious activity also adds a nice Cold War-style touch of fear. HOW TO SURVIVE A GARDEN GNOME ATTACK is a sharp parody of today’s polarized “killers and bedbugs behind every corner” culture. It’s also a slight tweak on modern in-your-face horror literature of zombies and other creepy things that go bump in the night.

Now we just have to figure out how to kill a vampire with a tiny corn cob holder.
Posted by Unknown at 9:10 AM