Take This Job and Fluff It 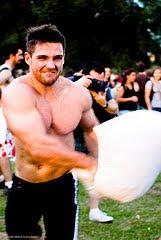 Within one week, the country discovered two incredible stories of people leaving their jobs with flair. Before they could even tell us that they don't like to talk about their flair, both were busted.

The story of Jenny quitting her skeezy boss via a white board and email was funny, imaginative and inspiring. It was also too good to be true, since the whole episode was quickly revealed to be a prank. (Although I still hope that out there, somewhere, a few downtrodden assistants took notes.)

So we were left with Steven Slater, a JetBlue flight attendant who apparently reached a personal tipping point in the delicate balance of job vs. crap and exited his employment in true blue, American, Johnny-Paycheck-Take-This-Job-and-Shove-It style by baring his soul, grabbing some suds and sliding into the sunset. Now 'apparently' may be the operative word in that entire folk-hero scenario, since other passengers on the plane claimed that no argument happened, Slater just snapped on his own and decided to start his weekend early.

In a tense economy, catching crap is now built into a lot of job descriptions. If you want to eat, then you keep a drawer full of fake smiles, vodka and Prozac. But both tales captured our collective imagination because they made us laugh, nod and be glad that no one was shot. Too bad both may turn out to be as genuine as the E! Channel reality show lineup.

There is one person, however, that may take the prize: an unnamed Lufthansa flight attendant. She didn't quit her job; in fact, she had fun with it. She started a pillow fight, lightened the passengers' mood and even received applause at the end. (Go ahead, read the Consumerist story and watch the clip.)

Maybe shoving that job isn't the answer when it all it needs is a good fluffing.

Photo credit: Flickr, via f_mafra
Posted by Unknown at 8:33 PM